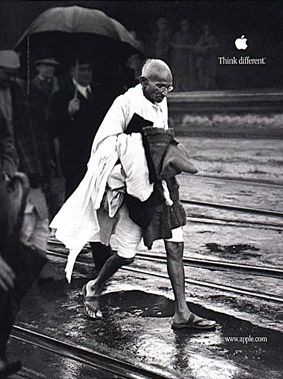 The black plague enhanced my influence with the poor Indians and increased my business and my responsibility. Some of the new contacts with Europeans became so close that they added considerably to my moral obligations. I made the acquaintance of Mr Polak in the vegetarian restaurant, just as I had made that of Mr West.

One evening a young man dining at a table a little way off sent me his card expressing a desire to see me. i invited him to come to my table, which he did. ‘I am sub-editor of The Critic,’ he said ‘When I read your letter to the press about the plague. I felt a strong desire to see you. I am glad to have this opportunity.’ Mr Polak’s candour drew me to him. The same evening we got to know each other. We seemed to hold closely similar views on the essential things of life. He liked simple life. He had a wonderful faculty of translating into practice anything that appealed to his intellect. Some of the changes that he had made in his life were as prompt as they were radical. Indian Opinion was getting more and more expensive every day. The very first report from Mr West was alarming. He wrote: ‘I do not expect the concern to yield the profit that you had thought probable. I am afraid there maybe even a loss. The books are not in order. There are heavy arrears to be recovered, but one cannot make head or tail of them. Considerable overhauling will have to be done. But all this need not alarm you. I shall try to put things right as best I can. I remain on, whether there is profit or not.’ Mr West might have left when he discovered that there was no profit, and I could not have blamed him. He had a right to arraign me for having described the concern as profitable without proper proof. But he never so much as uttered one word of complaint. I have, however, an impression that this discovery led Mr West to regard me as credulous. I had simply accepted Sjt. Manjit’s estimate without caring to examine it, and told Mr West to expect a profit. I now realize that a public worker should not make statements of which he has not made sure.

Above all, a votary of truth must exercise the greatest caution. To allow a man to believe a thing that one has fully verified is to compromise truth. I am pained to have to confess that, despite this knowledge, I have not quite conquered my credulous habit, for which my ambition to do more work than I can manage is responsible. This ambition has often been a source of worry more to my co-workers than to myself. On receipt of Mr West’s letter, I left for Natal. I had taken Mr Polak into my fullest confidence. He came to see me off at the Station and left with me a book to read during the journey, which he said I was sure to like. It was Ruskin’s Unto This Last. The book was impossible to lay aside, once I had begun it. It gripped me. Johannesburg to Durban was a twenty-four hours’ journey. The train reached there in the evening. I could not get any sleep that night. I determined to change my life by the ideals of the book. This was the first book of Ruskin I had ever read. During the days of my education I had read practically nothing outside textbooks, and after I launched into active life I had very little time for reading. I cannot, therefore, claim much book knowledge. However, I believe I have not lost much because of this enforced restraint. On the contrary, the limited reading may be said to have enabled me thoroughly to digest what I did read. Of these books, the one that brought about an instantaneous and practical transformation in my life was Unto This Last. I translated it later into Gujarati, entitling it Sarvodaya (the welfare of all).

I believe that I discovered some of my deepest convictions reflected in this great book of Ruskin, and that is why it so captured me and made me transform my life. A poet can call forth the good latent in the human breast. Poets do not influence all alike, for everyone is not evolved in an equal measure. The teaching of Unto This Last I understood to be:

2. That a lawyer’s work has the same value as the barber’s since all have the same right of earning their livelihood from their work.

3. That life of labour, i.e., the life of the tiller of the soil and the handicraftsman is the life worth living. The first of these I knew. The second I had dimly realized. The third had never occurred to me. Unto This Last made it as clear as daylight for me that the second and the third were contained in the first. I arose with the dawn, ready to reduce these principles to practice. ~