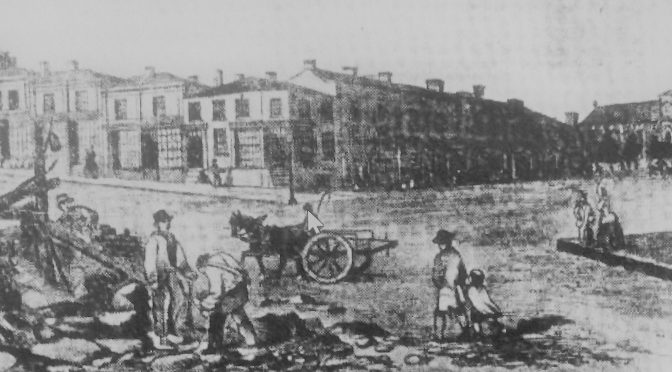 In the Spring of 1854 two young Danish farmers established a tobacco shop in the heart of Melbourne and watched the City grow around them. Over the years Damman’s shop occupied every corner of the Collins / Swanston intersection except the Town Hall corner.

George Damman arrived in Melbourne on a sailing ship in 1851, planning to seek his fortune on the goldfields of Victoria. George was unsuccessful in his quest for gold but instead of returning to Europe, he saw an opportunity to become rich another way – he established a tobacco business on the goldfields of Beechworth, Ballarat and Bendigo, selling tobacco to miners. The business (G. Damman & Co) flourished and George soon sent for his 18 year old brother Gustave to join him. In 1854 the brothers opened a tobacco shop on the southeast corner of Collins and Swanston Streets in Melbourne CBD (City Square corner). In 1882 the shop moved to the northwest corner of Collins and Swanston (the Manchester Unity corner) and moved again to the southwest corner (Westpac Bank) in 1909. Following the retirement of George and Gustav the business was taken over by Gustavs sons Percy and Oscar. Percys nephew Ronald Gustave Damman was working in the business at the outbreak of WW2 in 1939. Oscar died in 1949 and by 1954 the business was being run by the son of Gustav, 78 year old Percy Damman (who had joined the business in 1902). The business celebrated its Centenary in 1954. (from The Age newspaper 1954)