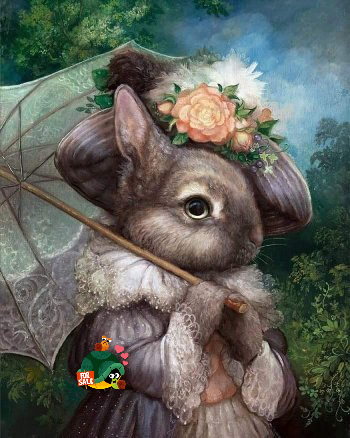 ‘Twas fancied by some, who but slightly had seen them,
That scarcely a difference was there between them;
But no one for long in this notion persisted,
So great a distinction there really existed.

Eliza knew well that she could not be pleasing,
While fretting and fuming, while sulky or teasing;
And therefore in company artfully tried­
Not to break her bad habits, but only to hide.

So when she was out, with much labour and pain,
She contrived to look almost a pleasant as Jane;
But then you might see, that in forcing a smile,
Her mouth was uneasy, and ached all the while.

And in spite of her care, it would sometimes befall,
That some cross event happen’d to ruin it all;
And because it might chance that her share was the worst,
Her temper broke loose, and her dimples dispersed.

But Jane, who had nothing she wanted to hide,
And therefore these troublesome arts never tried,
Had none of the care and fatigue of concealing,
But her face always show’d what her bosom was feeling.

At home or abroad there was peace in her smile,
A cheerful good nature that needed no guile.
And Eliza work’d hard, but could never obtain
The affection that freely was given to Jane.