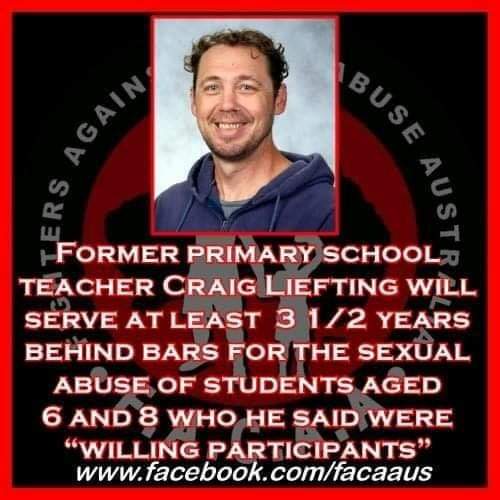 Former primary school teacher Craig Liefting will serve at least 3½ years behind bars for the sexual abuse of students aged 6 and 8 who he said were “willing participants.”

There should be no doubt why we believe child sex offenders cannot be rehabilitated.
Anyone who can convince themselves that children just 6 and 8 years old were “willing participants” in the sexual abuse they perpetrated against them has No Hope.

How can you be rehabilitated when you believe you have done nothing wrong.

We at FACAA believe sentences must be handed down that send the message loudly and clearly, if you seek out an occupation that puts you in a position of power over children, and then you abuse that power by choosing to sexually abuse one of those children, you should be sentenced to life in prison.
NO SECOND CHANCES,
NO OPPORTUNITY TO PREY UPON MORE CHILDREN.

A Gippsland primary school teacher has been sentenced to 5½ years jail for his “relentless” sexual offences against two girls. Craig Liefting, 49, of Inverloch, pleaded guilty to three charges of indecent acts against the two girls that occurred between 2013 and 2016.

The girls were in Grade 1 when the abuse started. The County Court of Victoria was told Liefting began teaching in Gippsland in 2002 and had a reputation for favouring and being affectionate with his female students.

On a transition day in 2013, one of his Grade 1 students went to him to seek comfort after her new teacher made her cry.

“You seated her on your lap and proceeded to put your hands down her pants,” Judge Anne Hassan said during sentencing.

The court was told he sought out his second victim in the school yard and began indecently touching her in 2014 when she was in Grade 1.

“[The victim] was made by you, to hide under your desk in your office,” Judge Hassan said.

“You wheeled your chair over to her and undid the zip of your trousers and exposed your penis.”

The court was told Liefting touched the girl’s genitals on most days over a period of about two years and that she felt “entirely powerless” to stop him.

“You would get soap from the bathroom and ask her not to wear underwear,” Judge Hassan told the court.

In 2014, Liefting was supervising a student sleepover in the library at school when he touched the girls’ genitals, only stopping when other students entered the room. A staff member went to the principal with concerns about Liefting after he was seen with his hand up a student’s dress, but he denied the allegations. He was arrested in October 2019 while working at another primary school and gave a “no comment” interview to police.

The other victim said in her statement that she was now “on guard when dealing with male teachers and men”. The County Court was told Liefting grew up in a strict Pentecostal Christian household and rejected his parents’ religious beliefs.

In a letter submitted to the court Liefting said: “I understand that I have caused two young people great emotional hurt and confusion and I apologise to these young people unreservedly.”

But a report by his clinical psychologist found Liefting thought of his victims as willing participants.

“Your victims were completely defenceless at the hands of their teacher,” Judge Hassan said.
Liefting must serve at least three and a half years in prison and will remain a registered serious sex offender for the rest of his life.

He told a psychologist one of his victims was a “willing and consenting participant”. Liefting also said the offending was “sexually gratifying” and “emotionally fulfilling”.

So he thinks children are ‘willing participants’ and finds sexually assaulting them to be ’emotionally fulfilling’. What kind of monster finds sexually assaulting children emotionally fulfilling ?
How is a 5½ year, with a minimum 3½ year sentence appropriate?
Even if he serves his full sentence of 5½ years that is still a slap in the face to the 2 brave young girls seeking justice for what he did to them. He should be locked up for the rest of his life.

The same psychiatrist said that Liefting is of a moderate to high risk of re-offending.

Moderate to high, he doesn’t see that he did anything wrong and finds doing it to be ’emotionally fulfilling’ !

This isn’t a moderate to high risk this is a 100% he will strike again !
He needs to be locked up, at the very least, until he realises that 6 year olds are not ‘willing participants’ in their own sexual abuse!

Why doesn’t our legal system care enough about our kids ? When will we get the justice system we deserve?