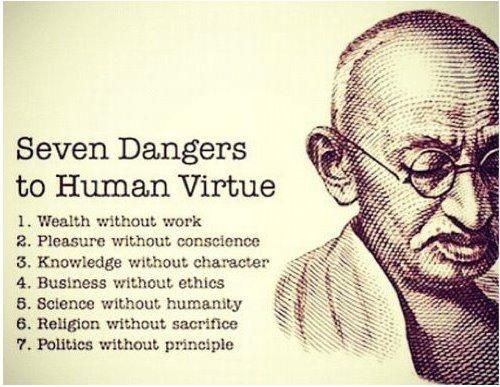 In Johannesburg, I had at one time as many as four Indian clerks, who were perhaps more like my sons than clerks. But even these were not enough for my work. It was impossible to do without typewriting, which, among us, if at all, only I knew. I taught it to two of the clerks, but they never came up to the mark because of their poor English.

And then one of these I wanted to train as an accountant. I could not get out anyone from Natal, for nobody could enter the Transvaal without a permit, and for my convenience, I was not prepared to ask a favour of the Permit Officer.

I was at my wits’ end. Arrears were fast mounting up, so much so that it seemed impossible for me, however much I might try, to cope with professional and public work. I was quite willing to engage a European clerk, but I was not sure to get a white man or woman to serve a coloured man like myself.

However, I decided to try. I approached a typewriter’s agent whom I knew and asked him to get me a stenographer. There were girls available, and he promised to try to secure the services of one. He came across a Scotch girl called Miss Dick, who had just come fresh from Scotland.

She had no objection to earning an honest livelihood, wherever available, and she was in need. So the agent sent her on to me. She immediately prepossessed me. ‘Don’t you mind serving under an Indian?’ I asked her. ‘Not at all,’ was her firm reply. ‘What salary do you expect?’ ‘Would £ 17/10 be too much?’ ‘Not too much if you will give me the work I want from you.

When can you join?’ ‘This moment if you wish.’ I was very pleased and straightaway started dictating letters to her. Before very long she became more a daughter or a sister to me than a mere stenotypist. I had scarcely any reason to find fault with her work. She was often entrusted with the management of funds amounting to thousands of pounds, and she was in charge of account books.

She won my complete confidence, but what was perhaps more, she confided to me her innermost thoughts and feelings. She sought my advice in the final choice of her husband, and I had the privilege to give her away in marriage.

As soon as Miss Dick became Mrs Macdonald, she had to leave me, but even after her marriage, she did not fail to respond, whenever under pressure I made a call upon her. But a permanent stenotypist was now needed in her place, and I was fortunate in getting another girl. She was Miss Schlesien, introduced to me by Mr Kallenbach, whom the reader will know in due course.

She is at present a teacher in one of the High School in the Transvaal. She was about seventeen when she came to me. Some of her idiosyncrasies were at times too much for Mr Kallenbach and me. She had come less to work as a stenotypist than to gain experience.

Colour prejudice was foreign to her temperament. She seemed to mind neither age nor experience. She would not hesitate even to the point of insulting a man and telling him to his face what she thought of him. Her impetuosity often landed me in difficulties, but her open and guileless temperament removed them as soon as they were created.

I have often signed without revision letters typed by her, as I considered her English to be better than mine, and had the fullest confidence in her loyalty. Her sacrifice was great. For a considerable period, she did not draw more than £ 6 and refused ever to receive more than £ 10 a month. When I urged her to take more, she would give me a scolding and say, ‘I am not here to draw a salary you. I am here because I like to work with you and I like your ideals.’

P0 She had once an occasion to take £ 40 from me, but she insisted on having it as a loan and repaid the full amount last year. Her courage was equal to her sacrifice. She is one of the few women I have been privileged to come across, with a character as clear as crystal and courage that would shame a warrior. She is a grown-up woman now. I do not know her mind quite as well as when she was with me, but my contact with this young lady will ever be for me a sacred recollection.

I would therefore be false to the truth if I kept back what I know about her. She knew neither night nor day in toiling for the cause. She ventured out on errands in the darkness of the night all by herself and angrily scouted any suggestion of an escort. Thousands of stalwart Indians looked up to her for guidance.

When during the Satyagraha days almost every one of the leaders was in jail, she led the movement single-handed. She had the management of thousands, a tremendous amount of correspondence, and Indian Opinion in her hands, but she never wearied.

I could go on without end writing thus about Miss Schlesien, but I shall conclude this chapter by citing Gokhale’s estimate of her. Gokhale knew every one of my co-workers. He was pleased with many of them, and would often give his opinion of them. He gave first place to Miss Schlesien amongst all the Indian and European co-workers.

‘I have rarely met with the sacrifice, the purity and the fearlessness I have seen in Miss Schlesien,’ said he. ‘Amongst your co-workers, she takes the first place in my estimation.’ ~