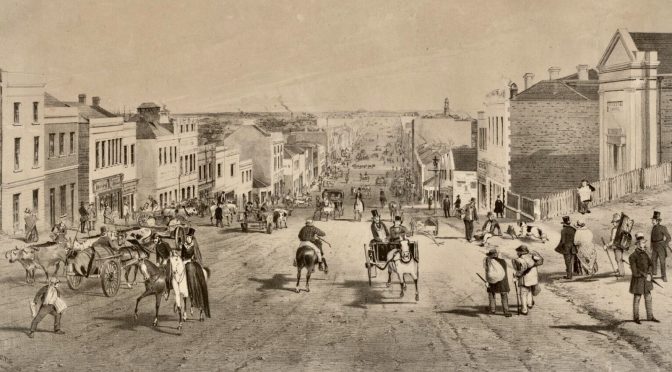 ▪️Melbourne was not yet 20 years old when Mr S.T. Gill produced this lithograph in 1853. It looks west down Collins Street, from Russell Street. In just 18 years Melbourne has progressed from a few huts on the banks of the Yarra to this: Wide avenues and sturdy stone buildings.

▪️This is also an interesting scene in that it shows the eastward movement of Melbourne, which initially was centred at the ‘top end of town’, around the Flinders/King Street precinct.

▪️On the right (cnr Russell and Collins) is the original Scots Church, opened in October 1841. It seated 500 parishioners and was built for a contract sum of £2,485.

▪️It’s likely that Mr Gill has produced a rather fanciful overview of the citizens of Melbourne, including in his drawing every character and conveyance likely to have been on show at the time. A couple of ox carts, a newspaper boy, a Soldier with his lady-friend, Two men racing up Collins Street in their gig, a couple of itinerant workers, probably heading for the goldfields: It’s all beautifully presented here.